EAGLE OF THE LAKE

I had heard about eagle sightings on my neighborhood lake since last spring. According to news reports and the local talk along Lake Natoma, two bald eagles had been wowing bird watchers and nature-loving photographers since last May. I had often combed the skies, searching for these white-headed raptors while out kayaking without much luck. I was more likely to see geese and turkey vulture on my outings on the water than anything else.

Eagles have been making comeback for past several decades across the country, since the banning of the agricultural spray DDT. The pesticide, linked to damaging environmental impacts and harmful health effects caused eggshell thinning and population declines in multiple North American bird of prey species. Today, nineteen nests have been tallied in eight San Francisco Bay Area counties, including at Stanford University, a mall and a water park, The Mercury News in San Jose reported this week, while experts say bald eagles have been spotted around Folsom Lake at least back to the mid-1990s.

“Lake Natoma could be a relatively new thing,” Capt. Mark Jeter, a warden with the California Department of Fish and Wildlife, told the Sacramento Bee in May 2016  interview,  “The species is doing very well throughout the continent. They are expanding into areas where they have not been in a long time.” 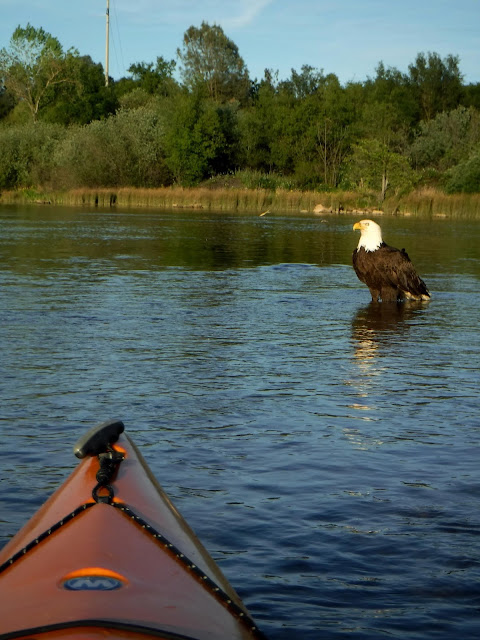 I was paddling back to the boat ramp through the slough across from Negro Bar when I saw the bird perched on a rock in shallow water. Up until then, the highlights of the trip had been paddling through a little stretch of whitewater under the Rainbow Bridge and seeing four river otters pop up their heads up out of the water. Seeing the eagle was an uncommon and amazing sight. With my back to the sun, I inched my kayak closer and closer to the bathing eagle.

An eagle conveys a message across all cultures. The Native Americans saw the eagle as a symbol of great strength, leadership and vision, while early Christians saw it as a symbol of hope and salvation. The eagle has been used as a 'banner' throughout history by the great empires of Egypt, Rome and even the United States. It is said, the eagle is man's connection to the divine because it flies higher than any other bird.

“An eagle soaring above a sheer cliff, where I suppose its nest is," said naturalist John Muir, "Makes another striking show of life, and helps to bring to mind the other people of the so-called solitude." 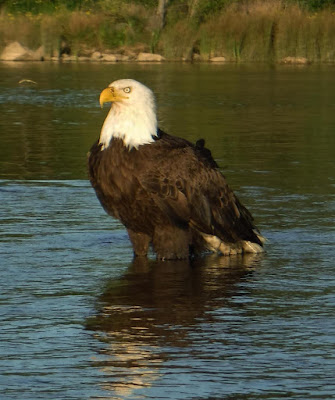 It was enjoying the life as a waterfowl I supposed as it balanced there on the lake rock with its feathers dripping from its bath. I have often mused how I would rather be a loon than an eagle. Yes, eagles soar, but aquatic birds fly and swim, it's the best of both worlds.

The raptor's white head and eyes glistened in the late afternoon sunshine as I anchored my kayak in the shallow rocking bottom of the lake. I held my breath almost every time I raised my waterproof pocket camera to take a photo of the bird. We sat there frozen for several minutes. Seemingly at one with the water and nature around us. Then in a moment, it stretched in giant wings skyward, lifting its talons out of the water, hovering over it by inches till gliding upward towards the safety of the trees.
Posted by Outside Adventure to the Max at 3:11 PM No comments: 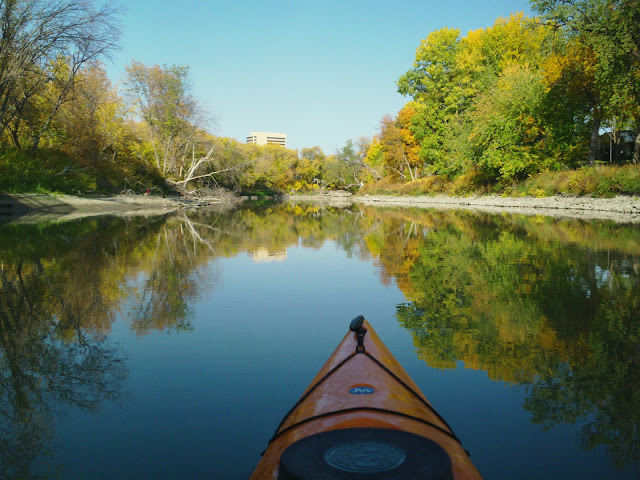 Choosing to save a river is more often an act of passion than of careful calculation. You make the choice because the river has touched your life in an intimate and irreversible way because you are unwilling to accept its loss. --David Bolling, How to Save a River: Handbook for Citizen Action


Back along the Red River separating downtown Fargo, N.D., with Moorhead. Minn there is a section of river near the First Avenue Bridge where bottles, crockery and other remnants from bygone days can be found when the river's fluctuating water levels uncover them from the bottom or riverbank.

It was the era before landfills and the river was a convenient disposal site. During the community's settlements, after the arrival of the railroad in the early 1870s, saloons began to proliferate on the Moorhead side of the river because Dakota Territory was "dry" and alcohol was prohibited. Thirsty North Dakotans filled the Red River bridges as they flocked to the Minnesota side for a legal drink. A thriving saloon district quickly sprang up on the banks of the Red. To be as close as possible to North Dakota side, several saloons were built on piers and actually hung out over the river. 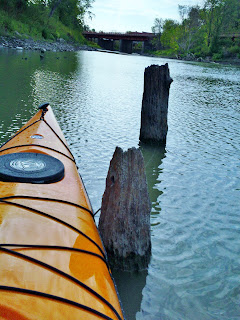 Many of the empty bottles found their way into the river as local legend suggest, many would drink up before crossing the bridge into Fargo, and tossing their bottles into the inky depths of the Red River midway. It was the case of out of sight, out of mind for many as the saloon business boomed until 1915 before Minnesota's Clay County finally went dry.

Of course, I like to say it all ended there for the Red River being used as a dumping site for garbage. I would like to believe all people today are more environmentally conscious, but as we all know, our rivers are just vulnerable today as they were back then. Trash can be still found today in and along the banks of our rivers.

So on this Earth Day 2017, Outside Adventure to the Max and American Rivers are asking for you to take action and clean up and protect the rivers in our own backyards. We need your pledge.The premise is simple. Every year, National River Cleanup® volunteers pull tons of trash out of our rivers, but by picking up trash you see around you every day, you can prevent it from getting into the rivers in the first place.

Will you pledge to pick up 25 pieces of trash in 25 days? Let’s prevent litter from making it into our local streams and rivers. Add your name here:

Make the River Cleanup Pledge, and share your work on social media with #rivercleanup to help grow our movement.

You are the key to protecting our rivers by setting an example for your community. We’re looking forward to seeing what we can do for our rivers together.

National River Cleanup® is a key initiative for American Rivers. Since its inception in 1991, they have engaged more than 1.3 million volunteers who have participated in thousands of cleanups across the country, covering more than 252,694 miles of waterways and removing more than 25 million pounds of litter and debris.
Posted by Outside Adventure to the Max at 12:33 PM No comments:

HOW FAR HAS THE RIVER TAKEN YOU? 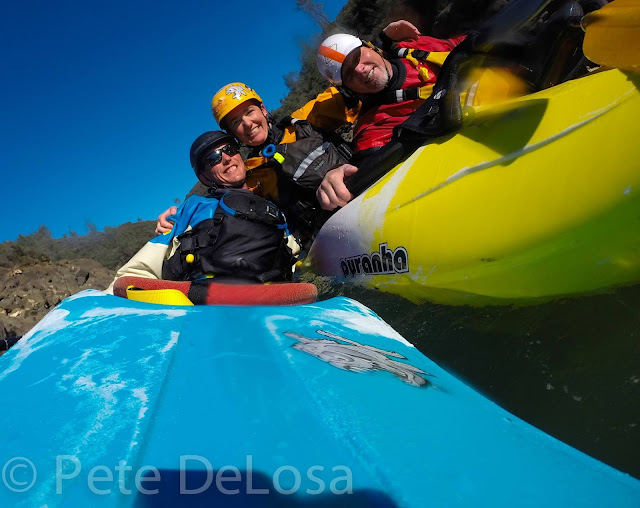 BY OUTSIDE ADVENTURE TO THE MAX GUEST BLOGGER PETE DELOSA

There’s an old saying, or maybe it’s a Chinese proverb, I don’t know, but it says, “No man ever steps in the same river twice for it is not the same river and he is not the same man.” If you’ve been in the kayaking community for more than a week you’ve probably heard this. It’s almost a cliche,  but it does serve as a good reminder that with time and running water, things will change. It’s nice then to be reminded that some things do last. Some things do stand the test of time. I took a walk today along the banks of Spring Creek in Bellefonte, PA. It was here in the fall of 1997,  that I took my first ever kayak lesson. I learned to paddle in a slalom boat in this short stretch of Class 2 whitewater. As I looked around the river it was obvious to me that a lot had changed, but a lot was still the same. Almost 20 years since I first learned to kayak the gates that are still hanging over the rapids. The man who taught me, Dave Kurtz now in his eighties, is still out there paddling and still making kayaking accessible to kids who otherwise would never have had the chance.

After a short chat with my old coach, my former C2 partner and life long best friend arrived and we put on for an after work float down the creek where we learned to paddle. What was once a pretty challenging trip was now a relaxing float. We got to reminisce about old times while watching red tail hawks and blue herons flying above us. There were obvious spots where various access improvements or erosion control projects and dam removals had changed the landscape, but there were also parts that were very much the same. For instance, just down stream of the slalom course there is still a flat pool that’s about 100 yards long. We spent hours after school doing flat water sprints in this pool. 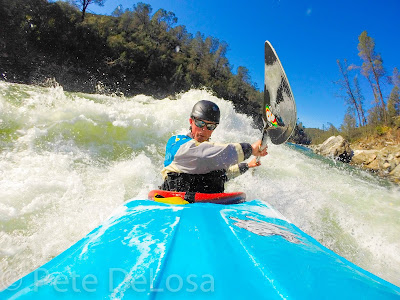 The world keeps turning and the water keeps running down hill. The river has taken me a long way. It was there for me in my adolescent years. It was there for me in my post war years. It has brought me many friends. It’s been there for me through love and through heart break. Today it brings me right back to the spot where it all began. In the most trying times of my life I always find peace, even if only for a little while, in the water that runs downhill. No matter what challenges, I’ve found that I just keep putting one paddle blade in front of the other and when in doubt, lean forward and paddle hard.

California based kayaker Pete Delosa is a member of Team Pyranha and sponsored by Immersion Research. You can catch up with Pete on his blog River-Bum.com and watch his videos on You-Tube.
Outside Adventure to the Max is always looking for guest bloggers. Contact us at Nickayak@gmail.com if you are interested.
Posted by Outside Adventure to the Max at 11:03 AM No comments: