OVER THE BOW: SAN FRANCISCO BAY 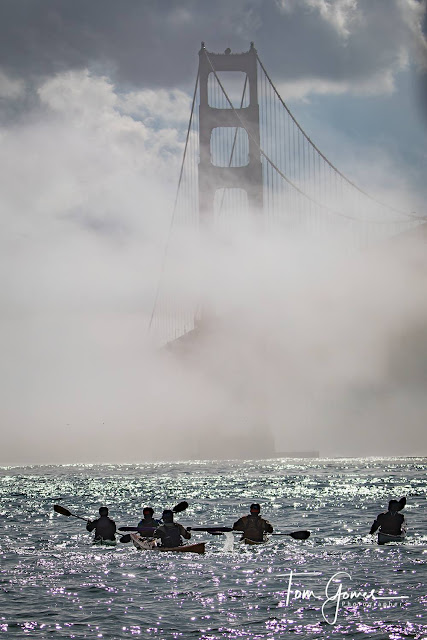 Once in a while, it's what you don't see, that creates something unforgettable.

It's a common weather phenomenon in the San Francisco Bay. The fog pushes its way through the Golden Gate, as each tiny water droplet is suspended in the atmosphere, swirling, drifting and climbing up and over the Marin Headlands before being thrown out over the water like a thick fuzzy fleece blanket, gently tucking in the city right at its shoreline piers.

"I never get tired of the grays and whites that overtake the sky," writes author Kyle Boelte, "Where I search for a million ways to say the word fog to match the million ways I’ve seen it surround me, and fail, always fail, for there is no way to capture it."

In the distance, the Golden Gate Bridge's towers seem to magically defy gravity and appear suspended and floating in a pillow of clouds. The fog is so dense that the rest of world-famous suspension bridge spanning the one-mile-wide strait connecting San Francisco Bay and the Pacific Ocean is hidden or a shadow in the mist.

"Its efficiency cannot conceal the artistry. There is heart there, and soul. It is an object to be contemplated for hours," That is what longtime San Francisco Chronicle columnist Herb Caen, said about said about his love for that "mystical structure" that he called "the greatest bridge ever built."

Of course, he's is not alone. It seems everyone who cast their eyes on the iconic bridge, even if it's lost in a haze, look on in adoration. It's like that Sacramento based sea kayaker and photographer Tom Gomes. He says his love affair with the Golden Gate Bridge has reached a whole new level after spending a weekend last month photographing the Paddle Golden Gate Symposium from the water.

"Merging my passions for photography, kayaking and the Golden Gate Bridge herself was an opportunity afforded to me by the organizers of the 2018 Paddle Golden Gate Symposium," wrote Gomes in an email, "The vision of paddlers at work with the iconic Golden Gate Bridge, Downtown San Francisco and Alcatraz as a background is a photographer’s dream come true."

The annual three-day paddling symposium gave area paddlers a challenging series of coastal exercises in the Bay's strong currents and powerful swells to help them advanced and develop their skills with some world's best paddling instructors and athletes.

Of course photographing the sessions like Kenny Howell and Sean Morely's SurfSki Adventure Class as they crossed under the north tower of the Golden Gate Bridge and out to open water to practice surfing ocean swells prove to be just as daunting.

"Capturing images from a very bouncy, moving boat presents challenges for any seasoned photographer,' wrote Gomes, "No tripod possible of course and knee pads are the knee savers that kept me in the right position to get the best shots. Shooting super fast kept my images sharp and the experienced pilots from SeaTrek knew how to position me with the iconic backgrounds in mind."